Gastronomic specialties of The Danube Region are among the most famous and most outstanding culinary treasures of Slovakia. Danube not only create a border of two countries and two nations, but also their flowline. Conflicts between the Slovak and Hungarian cultures, in certain period even Turkish culture, most frequently used to take place right here in southern Slovakia. And since the food does not know any borders, there was created a mixture of the best and strong tastes here.

The most popular Hungarian dishes of The Danube Region are goulash, paprikáš, lečo, živánska, šomloi halušky or traditional Jókai bean soup. This particular soup is a center of attention of multiple local gastronomic contests where the judges judge the best cooked “bableves”. Popular are mostly foods consisting of pork, chicken and fish.

Amazing ingredient is all the vegetables grown in local gardens and fields. Tomatoes, peppers, onion, cabbage, but also hot peppers, which is an important ingredient in all southern foods with the taste of Hungarian cuisine. South of Slovakia and The Danube Region is an amazing location for growing heat-demanding vegetables.

Fruit growing, canned fruit production and of course tasty fruit alcohol are typical for this region.

Jókai bean soup is so dense that after just one serving you will not want any main dish. Properly mixed blend of red beans, smoked pork knee, sausage and several other ingredients with a slice of bread topped with a spoon of sour cream will satisfy every gastronome.

Somloi dumplings (hun.: somlói galuska) is a popular sweet dessert made of dough, sweet vanilla cream and chocolate which soaks all the way through the dessert. It is one of the most popular foods in this region and the most popular dessert in entire Hungary which became popular because of one of the Budapest’s most famous restaurants Gundel.

Traditional haláslé (hun.: halászlé), therefore a fish soup, is cooked in southern Slovakia out of carp. Many cooks embark the bridle of their imagination and use a blend of multiple fish species. According to the taste and the density they add the fish eggs, roe or potatoes. Thanks to those haláslé can be a thin soup.

The dough of sheep's cheese dumplings contains grated raw potatoes. Then we add a sheep cheese, sour cream and fried bacon or ham.

Perkelt (hun.: pörkölt) is very similar to the goulash but contains less water and more meat – chicken, beef, pork as well as fish. Bread, potatoes, dumplings or even pasta or rice are served as a side for perkelt.

“Tócsni” is made with grated raw potatoes and flour. Fry in a pan like pancakes, without fat or a little oil.

Roast pork with dumplings and cabbage is also a typical Slavic speciality. The composition of the dough varies is different. In Slavic cuisine, it is without filling, it can be in the form of dumplings or strudel. Boil in salted water or steam.

The cabbage soup is made from sour cabbage. It is cooked a little differently in each region. The fasting Catholic Christmas cabbage soup (made on 24th December) is a bit poorer, because it is without meat, it is with dumplings, sour cream and grated potatoes. In the Lutheran Christmas cabbage soup we find e.g. smoked meat and sausages, but someone also fools them with dried mushrooms. It is traditionally made at the end of the calendar year. 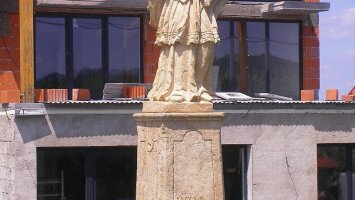 The Statue of St. John Nepomuk 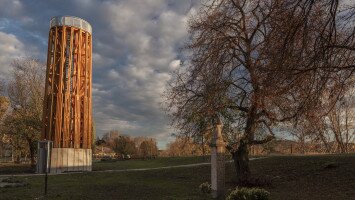 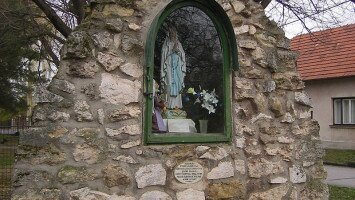