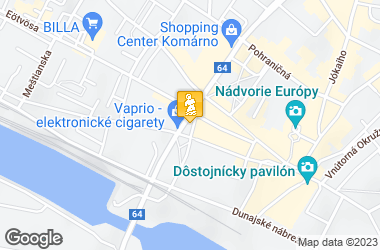 Opposite the Park of Franz Lehár, there is the statue of St. Stephen – the first Hungarian king.

The work of sculptor Lajos Győrfy, which has been decorating Komárno since 2009.

St. Stephen was born around 975 in Esztergom, Hungary. His original name was Vajk (Turkish: hero, leader), and only later did he gain the later name of St. Stephen, referring to the first martyrdom. According to tradition, he learned Latin as a child, his father prepared him early and thoroughly for the reign. He considered his subjects in other languages to be equivalent to Hungarians. He fought successfully against his external and internal enemies threatening his country. His military skills were impressive, we don’t know about his losing battle, his military failure. He requested and received a crown from Pope Silvester II. He was crowned to king at Christmas in the 1000th year of the Lord. The country builder St. Stephen organized the county system of the kingdom and designated Komárno Castle as the center of one of the counties. He died in 1038, and was buried in Székesfehérvár in the former cathedral. Its tomb and its stone-carved sarcophagus can still be found and viewed in the museum there.