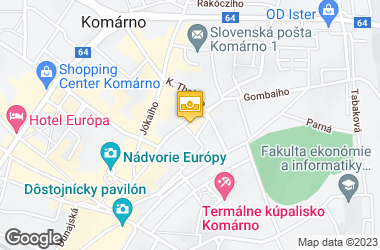 If we turn right at the end of Jókai Street and walk along Thaly Kálmán street, we reach the Franciscan Monks´Street. The street got its name from the Franciscan monks, who settled in the town in the 17th century. Walking towards the right we can see a baroque church. The church, originally built by the Dominicans, fell into the hands of the Reformed and later in 1672 by the Franciscans, who rebuilt it in Baroque style, with a tower. In addition to the church, they also built their monastery, which was expanded in 1750. After the earthquake of 1763, the church was renovated in 1769, with the tower, which can still be seen today, dates from this period. Members of the order left the town in the early 19th century, and the building was used by the local military regiment, which used it as a garrison church, which is why locals still call it a military church. There was also a military hospital, a food depot, and officer flats here. The church was renovated in 1906 and used by the military for church ceremonies until 1945. It was then used as a warehouse. The monastery building was damaged during World War II. The military church, which was in poor condition, was restored in the 1990s.

In 2001, the management of the town of Komárno commissioned the Civic Association Pro Arte Danubii to transform the church into a place for the presentation of cultural values. The building was then renamed to Gallery Limes. Its mission is to present contemporary domestic fine arts. All events in the gallery take place in a festive and dignified atmosphere.

The building is a national cultural monument.