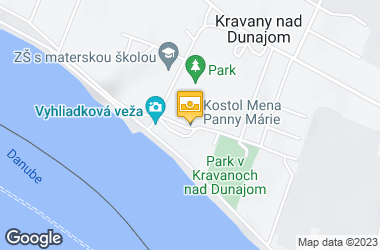 The specialty of Kravany nad Dunajom is the Roman Catholic church dedicated to the Blessed Virgin Mary. It was built in 1232 in late Romanesque style.

During the Turkish wars and riots, the church was destroyed and only renovated around at 1712 by Count Ferenc Gyulay, and then renovated again in 1936 according to its Baroque condition. The nave was originally covered with a beamed ceiling, according to records from canonical visits. The church was consecrated in honor of St. Lawrence and was only offered to its patron saint today after the Baroque renovation. The church also had a tower, which was removed during in 1712 repair.

The building was damaged in the World War II and was only repaired in the 1970s. A single-nave building without a tower, the south facade ending in a carved pediment has been rebuilt in Baroque style, the main entrance gate has a stone portal. Smooth facades are divided by semicircular windows. A smaller sacristy was built to the west facade of the nave. The semicircular sanctuary is divided by narrow sloping arched slit windows. The triumphal arch dates from 1936. The pilastered wooden main altar with a snail-shaped substructure dates from the early 18th century. In addition to the central oil painting of the Virgin Mary, the sculptures of St. Joseph, St. Francis of Seraphia, St. Anthony and St. John of Nepomuk can be seen on both sides. The altar was donated to the church by the monks of Esztergom after 1700. The side altar of King St. Stephen dates from the 19th century, and the side altar of the Sacred Heart of Jesus was made in the early 20th century. There is a pendant depicting the baptism of Christ in the nave. The church is also decorated with statues of St. Joseph, St. Teresa and St. Anthony. Mounted to the wall of the ship we find the processional cross with a hull. The Lourdes Cave was built in 1992 with a statue of the Virgin Mary.

The two red marble holy water reservoirs date from the early 19th century. One reads András Csapszký and Erzsébet Fenekes, the other: János Makhala and Fáni Ölveczky. The harmonium in the choir, supported by three arcades, was created by the Hof Harmonium M. Hörügel Fabrik (Wien) in Vienna. The most valuable memory of the church is two red marble tombstones. One bears the inscription: Hic est Sepultura nobilium de Lábathlan Anno Domini (sic!) Milessimo quadringentesimo (Here is the resting place of the noble Lábatlan family in the year 1400 of the Lord.), inscription and unfinished coat of arms board. During the earthquake of 1753, these tombstones cracked, so they were later built into the wall of the nave. The church housed the obelisk of an empire tomb made of pink marble by József Kondé Benedek in 1831, which originally stood in the old cemetery next to the church. A notable work of an unknown stonemason. There is a small plaque on the outer wall of the nave with the inscription: Hydrographic Height 1898. An old wooden belfry was built in the 18th century, and in 1926 a new one was built in its place. 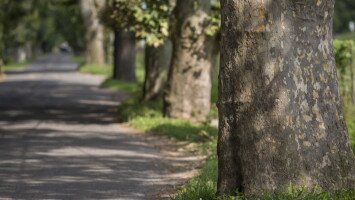 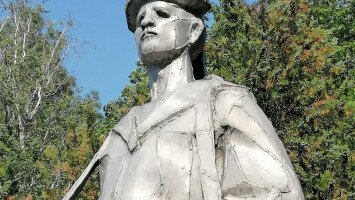 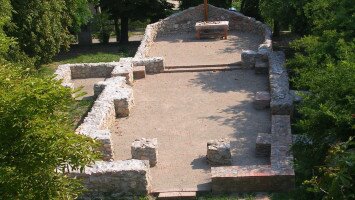 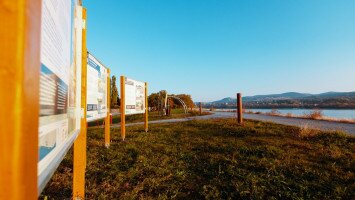