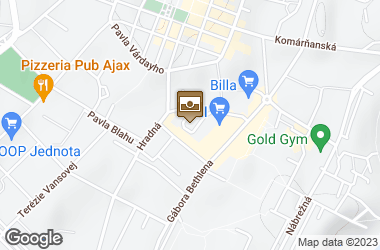 The riding hall is located in the area of former military barracks. It appears in the register of immovable national monuments of Slovakia under the common name "Barracks of Maria Theresa".

The complex was probably built in the last third of the 18th century. The barracks were built in the style of classicism, they have preserved their architectural features to this day. The entrance gate to the complex, built in the classicist style, also has a historical value. In the first decades of the 20th century, the barracks were enriched with a military riding school. It appears in the mentioned register under the name "Old Husar Riding School". After 1968, Soviet soldiers were moved into the area. After the revolution in 1989, the barracks were abandoned and the building with the riding hall became the property of the town.

On August 8, 2007, the riding hall building was declared a cultural monument. In terms of typological type, it is probably the only preserved object of its kind in the Slovak Republic. The uniqueness is especially the roof construction created as a combined wood-steel system with a width of 22 meters and a length of 70 meters. The authors of the project considered it important to preserve the monumental value of the riding school. The main idea of the project and the design of the reconstruction and adaptation of the building was the preservation of monuments as well as its physical preservation in the new functional use of the building for cultural purposes.
During the bombing of Nové Zámky at the end of World War II, most of the historic buildings in the city were destroyed. The Imperial-Royal Riding Hall is one of the few buildings that has remained standing to this day.

A cultural stand has grown out of the historic Riding Hall, which serves cultural, social and educational activities.

The statue of the Holy Trinity