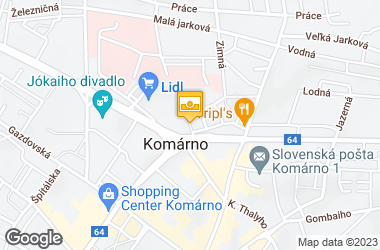 The Church of St. Rosalia in Komárno is located on the border of the city center and the railway district, on Rosalia Square (in the northern part of Kossuth Square). With its hemispherical dome, it is one of the characteristic buildings of the city. It was built in a classicist style. The church was built to replace the Votive Church of St. Rosalia, which was erected in memory of the great plague (1710-1711) by the Jesuit parish priest István Cserkó on the banks of the rivers Váh and Danube. When the Palatine Line was built, it was demolished, and the military treasury paid compensation to the city for its expropriation.

Part of this money was used to build the new church, which was dedicated in September 1844. Two smaller towers were built in front of the main dome, where the two bells were placed. The church was surrounded by a wall, within was placed the crossroad with 14 stations. After the fire of 1848 (since the Catholic churches were all burnt down), after the bombing of the Catholic and then the Reformed church, the Reformed services were also held here. From 1860 to 1880 student masses were held here, and until 1906 it served as a garrison church. In the garden of the church a small Calvary was formed, which was built into the brick wall surrounding the church. The stations of the crossroads, which are about 70 m long, follow each other every 5-6 meters. The stations are tympanum constructions protruding high from the wall, and the pictures of the crossroads placed in their recess were protected by lockable wooden boards. The original scenes painted on tin were later placed in the church, in the empty booths were placed in 1965 the paintings from the painter János Pleidell (1915-2007) made with a sgraffito decorative method.