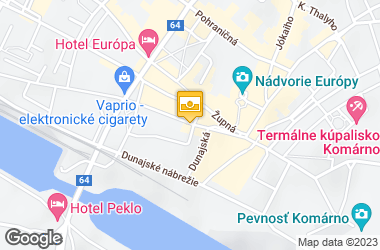 The St. Andrew´s Cathedral in Komárno is one of the dominant buildings in the town. It is located on the Palatinova Street, opposite the Danube Museum.

It was erected by the Jesuits between 1748-1756. It collapsed during the earthquake of 1763, but in the following years it was rebuilt according to the original plans. In its present form, it was built between 1768 and 1771 in Baroque style.

After the suppression of the Jesuits, it fell under the care of the Benedictines. He suffered many fires and natural disasters. It was almost completely destroyed by the great city fire of 1848. It was reconstructed in 1860 from public donations.

The church was granted the title ´Basilica´ (basilica minor) in 2018.

It has excellent acoustics and one of the most impressive sounding organs in the region also provides an opportunity to organize concerts. The organ was made by Carl Friedrich.

The high altar was built by Karl Petrus from Vienna between 1855 and 1860. The altar picture represents St. Andrew.

Below the church is a large, 3-level crypt with about 500 grave spaces. Most of them are empty, and have never been used.