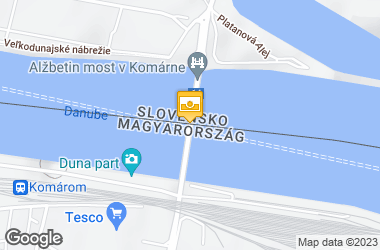 The road to the Elizabeth Bridge leads over the opening bridge overlooking the port of Komárno and the shipyard. The shipyards were established at the end of the 19th century and experienced the greatest expansion during the period of socialism, when sea-river ships were mainly built here. The first so-called the ship bridge was built in Komárno in 1586 and was carried by 79 ships. In 1892, the bridge was replaced by the solid Elizabeth Bridge, named after Empress Sissi.

The bridge is built over the River Danube. For more than 100 years, it has been linking two cities that once formed one city and were divided by the first Czechoslovak Republic. It is a border bridge between Komárno and Komárom. At the half of the bridge is a line that divides our republic with Hungary. It is clearly marked on the bridge and thanks to this, it is quite interesting to stand in the middle of the bridge with one foot in Hungary and with the second in Slovakia.