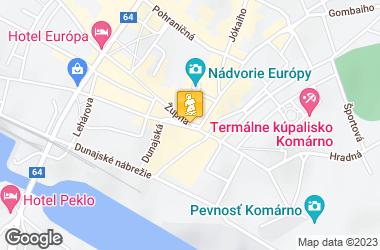 This monument is one of the oldest ones in Komárno. The statue was set up in 1715 according to the chronogram on it, but its history goes back to that time. In 1703, they were afraid of a rebellious enemy. People of Komarno prayed to the holiest divinity to gain protection. They primised to build a statue for the Holy trinity. The enemy took their reception graciously and the natives did not let this city be destroyed by enemy weapons. They forgot to keep their promise and thought that they were punished for that.

From 1710 another danger threatened the population: the plague epidemic arrived to Komárno. There was a day when over half of a hundred people became victims of the disease.
Immediately, after the plague epidemic, only a wooden trinity statue was temporarily built on the city market. The stoned version of the present sculpture was completed in 1715 on Sunday, on the day of the Trinity.