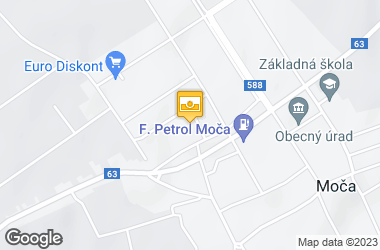 The Reformed church was built in the Classicist style between 1856-1860. Previously, the Reformed had a house of prayer and a bell tower in the village. The tower of the church was destroyed in 1945 and restored by 1956. One of the largest Reformed churches in Slovakia. There are also two memorial plaques in the church, the red limestone plaque in 1860 commemorates the construction of the church, and on the other we can read the list of the Moča´s Reformed who fell in the World War I. In front of the church there are two protected lime trees.

In front of the church stands a monument to the victims of the World War II, which was erected in 1993, as well as the Millennium Memorial Tree erected in 1996.

The Monument of the victims of World War I.