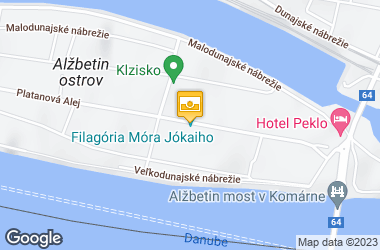 Móric Jókai, commonly known as Mór Jókai, the "great storyteller"; was a famous Hungarian writer. He was born in Komárno. The island Elizabeth Island "as the people of Komárno know" had a strong influence on the young writer. Here, on the island was the Beöthy-garden, where the literary elit was reguralry meeting, dicussing the political, economical and of course philosophical and literary issues of the era.

After the death of Mór Jókai, Zsolt Beöthy set this memorial on his 65th birthday to faithfully preserve the writer's size and spirit.