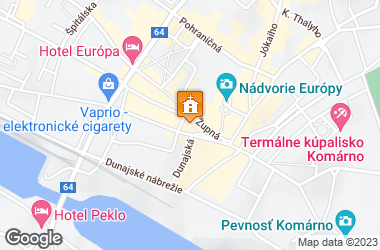 In a will of Borbála Miletics, a wealthy citizen of Komárno in 1709, she left two shop premises and her house to the poor, founding the poorhouse. Next to the poorhouse a chapel was built in 1750, which was damaged shortly after the 1763 earthquake and burned down in 1768.

The poor house, which accommodated 12 poor people, was also significantly supported by the canons of Ignác Bärnkopf in Esztergom. People living in poor houses could beg in the city twice a year, on Easter and on St. Anne’s Day. The poor house and chapel burned down in the 1848. After the restoration of the chapel (since the church of St. John they used to have not been rebuilt), it was used by the German inhabitants of the town. Its two small bells were fused during the World War I. Later, in 1922, a new one was cast in Jakab Dosztál's workshop. The poor house (operating from donations from the 1920s due to inflation) exists until 1945.